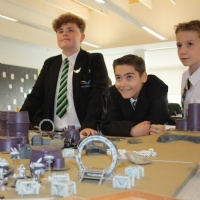 An after-school fantasy board/card games club is proving to be a hit with students from Year 7 through to Sixth Form.

An after-school fantasy board/card games club is proving to be a hit with students from Year 7 through to Sixth Form.

Goblin’s Den gives students the chance to build, paint and play model games including Warhammer 40,000. With each army having its own set of rules, students use literacy and numeracy skills while developing tactics. They also take responsibility for teaching other students the rules of the games.

Goblin’s Den meets every Wednesday and was set up by teacher John Birch. Mr Birch said: “As part of the club, we run a coloured badge scheme. Players are awarded a white goblin badge for passing a maths test, a literacy test and even cooking dinner for everyone at home. The maths test is actually a foundation maths paper I have converted into fantasy-style questions and the literacy test uses the Academy’s Accelerated Reader scheme.

“The cooking challenge takes them out of their comfort zone, with their families judging their success based on cooking, taste and cleaning up afterwards. They even write a short review of the dinner.”

Games like Warhammer 40,000 is now on the Duke of Edinburgh award scheme as a skills task students can participate in.

Year 9 student Owen Haddikin regularly attends Goblin’s Den. He said: “I got into it because my brother introduced me to card games when I was younger so when I found out about this club, I wanted to come along. It’s good to do something different and if you think you’ll like something, you should try it out.”