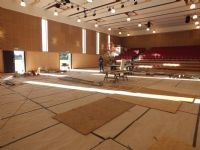 The Academy’s new theatre is set to be completed and handed over this week.

The Academy’s new theatre is set to be completed and handed over this week.

Construction firm Kier is set to hand the finished theatre over on Friday, September 14.

The work has come in more than a month ahead of schedule.

The theatre, which will seat more than 450 people, is set to be used for assemblies and by the community.

Its stage can be partitioned off and has been built to serve as a dance studio when not in use.

There are doors on each side of the theatre, one of which leads into the Academy’s restaurant area and one which leads outside towards the car park, making it ideal for use outside of school hours.

Head of the Pankhurst Learning Community Gerwyn Williams said: “This will become a community theatre as well as the school theatre. There are developments to work with the community to put productions on and to have visiting artists.

“It is designed so that it’s linked to the restaurant and the car park so the area is contained for evening use.

“It was set to be completed in the October half term but Kier have worked so hard on it, it’s six weeks early.

“I think people are going to be absolutely blown away by it.”

The seats in the theatre are red and the colour was specially chosen as a nod to the Academy’s heritage, as red was the colour for The Queen’s School.