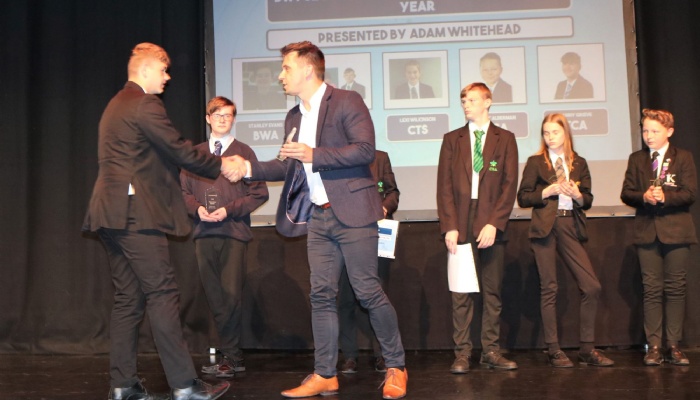 Well done to our students who were awarded the following accolades at the Trust Sports Awards 2019:

Danny Grieve won Sports Performer of the Year for TCA. He was described at the ceremony as ‘an extremely gifted rugby player who has signed with Northampton Saints.’

The Individual Achievement Award went to Oliwia Bolka. Trust Director of Sport Kirstie Smith said: ‘Oliwia has excelled in PE both practically and academically this year. She has also become an integral member of the Wisbech Hockey Club, an initiative that was set up in the PE department at Thomas Clarkson Academy.’

Kacper Bembenek-Widuch was named for his Outstanding Contribution to Leadership. His nomination said: ‘Kacper has shown true leadership quality this year, acting as a role model for younger students and encouraging them to take part in sport and PE.’

Joshua Watson picked up the Sporting Volunteer of the Year award for TCA. He has become an integral member of Wisbech Hockey Club, is regularly involved in coaching the younger players and helps out as much as he can.

Well done also to our Year 10 Girls Football team who were nominated for the BWT Secondary Team of the Year category and for our dancers who put on a fantastic performance during the show.

To see a gallery of photographs from the event click here.