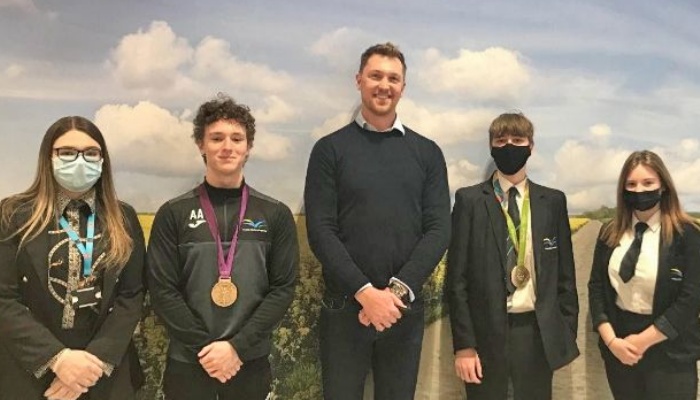 A multi-gold medal winning athlete told a group of our students how hard work and dedication could be the key to their future success.

Double Olympic gold medal rower Alex Gregory was invited to talk to pupils and help inspire them ahead of the exam season and after a long period of disruption.

Alex said his path to success wasn’t always easy for him, and he stressed how important it was to ask for help if you are struggling.

“The students were really impressed with how Alex kept trying, despite coming across barriers and failures along the way. He stressed the importance of teamwork,” said Head of Sixth Form Miss Hornby.

“Alex’s path to Olympic Gold wasn’t straightforward, which demonstrates the importance of resilience and hard work. With the huge disruption to education and exams fast approaching, we hope that Alex’s talk will inspire our students to remain focussed on the exams and the opportunities which their results will create for them.”

“A cracker of a day with the brilliant people at the Thomas Clarkson Academy, talking Opportunities,” he said.

“Hard times make tough people, it’s not easy for our young at the moment, but they will succeed.”

Now an expert coach and motivational speaker, Alex was awarded the MBE in 2013 for services to rowing. He has previously spoken publicly about his struggles to succeed and the fact he was ready to give up his dreams before he found a way forward.

Alex went on to win gold medals in the coxless fours at the London Olympic Games in 2012 and Rio in 2016. He also won the World Championships three times in the class and twice in the eights as well as gold in the 2014 and 2016 coxless fours in the European Championships.