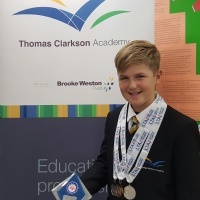 Year 7 student Seth Briggs-Williams has his sights set on a tennis career after winning around 50 trophies and100 medals so far.

Year 7 student Seth Briggs-Williams has his sights set on a tennis career after winning around 50 trophies and100 medals so far. Seth, who began playing aged just three, achieved a gold and two silvers in his latest competition bouts and is rising up the Lawn Tennis Association’s rankings.

He trains up to 15 times a week in Peterborough and has two coaches, one who helps with footwork and the other who specialises in hitting techniques. When the players’ rankings are updated in April Seth is on course to be the top in the county and in the top five players in the country in his age group. He is hoping to be invited along to a specialist training camp in Spain next summer to boost his game still further.

Seth said: ‘The more competitions you win the more you get invited to. I recently played in London in a county final U14 tournament and came second and, that same weekend, I won the U12 competition and came second in the 16-and-under category at a competition in Northampton. I train every day until late and put in about 12 – 15 practice sessions a week. I have to do a lot of drills, like footwork, as I need to run around the court quickly so I keep practising basic things like forehand and backhand.’

Playing against opponents up to five years older in the U-16s Premier League squad doesn’t faze him: ‘It doesn’t matter how old they are, as they are just another player on the court. I like tennis because it is quite relaxed although I prefer singles to doubles. You need to be mentally strong because the matches can go on for a long time and you have to just keep at it and not give up. The longest match I had lasted four and a half hours! I always look forward to the competitions and sometimes I take my homework along and do it between matches!’